DEFENDER OF THE CHURCH OF CHRIST (Third Part) MYSTERY 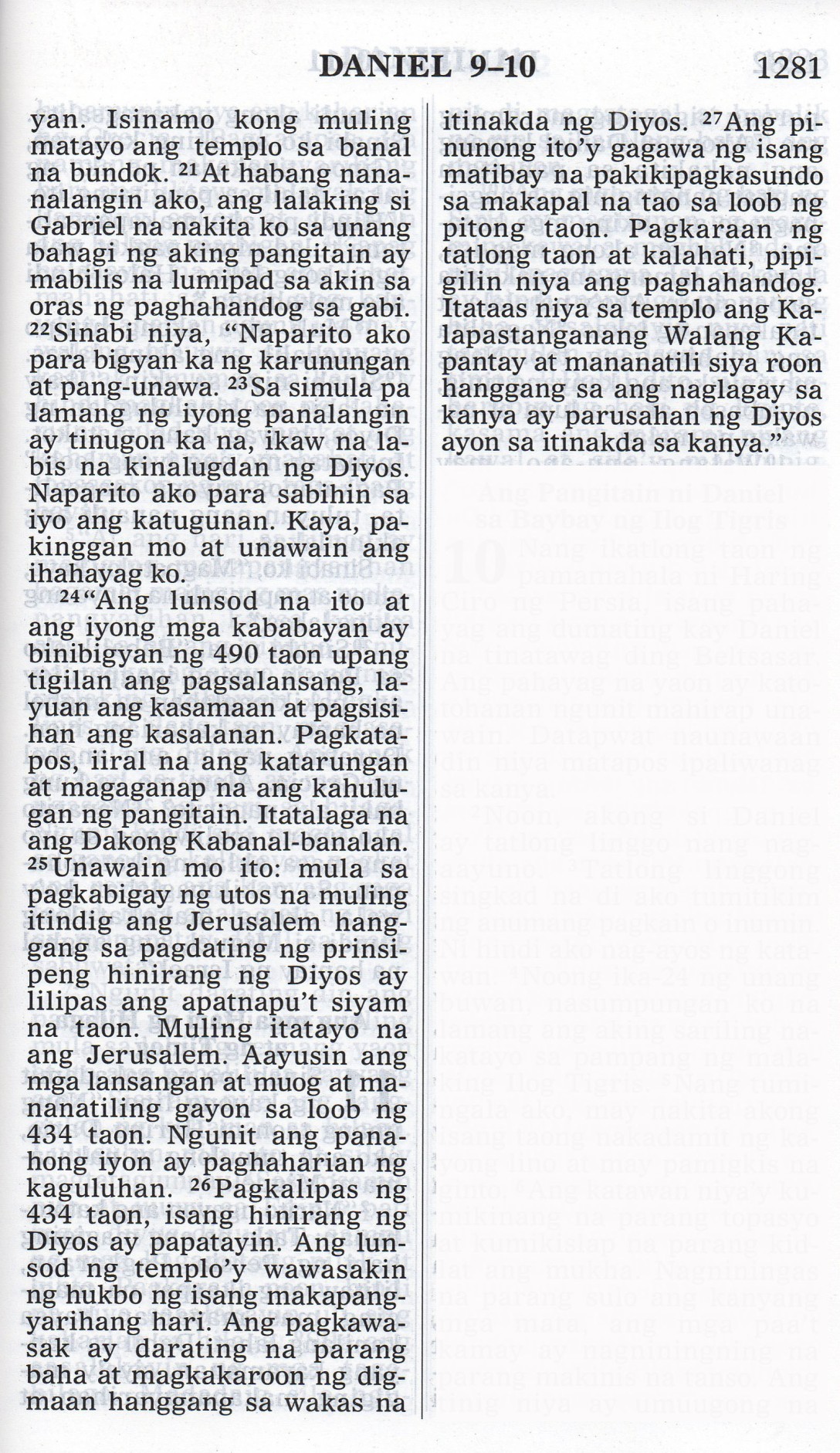 The prophet Daniel was well known. During his time, he was acknowledged by the king because of his extraordinary ability to interpret dreams. Daniel was also utilized by the Lord God to reveal mysteries. Daniel who was given these qualities did not fail to introduce the One who really reveals mysteries. Daniel 2: 28 But there is a God in heaven, who reveals mysteries. He has informed your majesty what will happen in the future. He successfully interpreted dreams, not because of his knowledge and proficiency. Nor because he is greater than the wise men, but only through the help of the Lord, our God as he declared.

The prophet Daniel from the tribe of Judah find favor in the sight of the Lord God. For being prayerful and having strong faith in God, Daniel was given wisdom, ability to understand and interpret the meaning of visions and dreams. These extraordinary attributes that Daniel posses draws him close to the King and win his trust during those days.

Daniel 6: 3 Then this Daniel was distinguished above the presidents and the satraps, because an excellent spirit was in him; and the king thought to set him over the whole realm. 4 Then the presidents and the satraps sought to find occasion against Daniel as touching the kingdom; but they could find no occasion nor fault, for as much as he was faithful, neither was there any error or fault found in him. 5 Then said these men, We shall not find any occasion against this Daniel, except we find it against him concerning the law of his God. These wise men tricked the king to enact a law that for thirty days no one will conduct a prayer to any god and violators will be thrown in the den of lions. Daniel 6: 10 And when Daniel knew that the writing was signed, he went into his house (now his windows were open in his chamber toward Jerusalem) and he kneeled upon his knees three times a day, and prayed, and gave thanks before his God, as he did aforetime. Daniel was being guarded by the jealous wise men who are opposing him, then they testified before the king, and so Daniel was thrown into a den with lions. But those who plotted against Daniel were the ones devoured by the lions when the king commanded that they be thrown to the cave of lions. Whereas Daniel did not sustain even a scratch from the claw of the lions, which delighted the king who in turn praise Daniel’s God whom Daniel regularly pray to without fail.

Even the Angel of the Lord God: Archangel Gabriel and Archangel Michael were both sent to assist and help Daniel. Until: Daniel 12: 4“But you, Daniel, shut up the words, and seal the book until the time of the end; many shall run to and fro, and knowledge shall increase.” “Daniel was instructed by Archangel Michael, the Angel of the Lord God to carefully close and seal the book because there is an appointed time by the Lord God for it to be revealed but until that time comes it will be kept in secret.

In Daniel 12: 4 TEV …   This is the rendition … 4He said to me, “And now, Daniel, close the book and put a seal on it until the end of the world. Meanwhile, many people will waste their efforts trying to understand what is happening.”

And in Daniel 12: 4 Moffat …  It is translated … “And now, O Daniel, keep all this a close secret and keep the book shut as a secret, till the crisis at the end; ere then many shall give way and trouble shall be multiplied on earth.”

But Daniel insists that he be able to comprehend the vision shown to him by God. Again he asked … Daniel 12: 8 Although I heard, I did not understand. Then I said, “My lord, what shall be the end of these things?” 9 And he said, “Go your way, Daniel, for the words are closed up and sealed till the time of the end.

Daniel really wanted to understand but it’s not the time for it to be revealed, so he was not allowed. What did Daniel see in his vision?  Daniel 12: TEV  5 Then I saw two men standing by a river, one on each bank. 6 One of them asked the angel who was standing further upstream, “How long will it be until these amazing events come to an end?” 7 The angel raised both hands toward the sky and made a solemn promise in the name of the Eternal God. I heard him say, “It will be three and a half years. When the persecution of God’s people ends, all these things will have happened.” The prophet Daniel understand initially, that the visions presented to him will happen after the suffering of the people of God. Daniel saw the two people on each side of the river bank, an angel responded when asked by one of them regarding the events described in the vision concerning the two people. How is this associated and what part does it have in the secret plan of God, and does it has any relevance to the events currently happening? And when will the three and a half years that ends the suffering of the people of God as mentioned in the prophecy takes place? These questions puzzled the Prophet Daniel. Daniel 12: 10 Many shall purify themselves, and make themselves white, and be refined; but the wicked shall do wickedly; and none of the wicked shall understand; but they that are wise shall understand. These pronouncement to Daniel by the angel of the Lord was kept secret even after the prophet’s death.

And up to this time, many people had been persistent with their research, trying every means to understand the prophecy. But, the secret as to what relevance the visions of the prophet Daniel has to our era remains a mystery. Therefore, it’s not a task that can be handled easily for anyone to study, learn and understand even by the elect from previous generations, the Bible experts, professional historians, God’s early messengers, the blessed preachers, pastors, church workers, and educators of religion as to whom these visions by the prophet Daniel will be revealed. But truly everybody has his own destiny, in accordance with the righteous gift that God is giving them. So that no one, not from their colleague, prophesiers – known and unknown, dreamers, those who claim and acclaimed to be prophets, all of them are equally baffled and has also asked the meaning of these visions by the prophet Daniel. But there is someone who becomes successful, who was endowed with understanding. The Executive Minister had acknowledge his election. And your servant was also fortunate to be allowed to partake of this wisdom from our Lord God. So again, “In due time, I will introduce myself! For someone is greater than me.” “He is me, but I’m not him.” “I am with him, but he is not mine.” “What I am thinking, he is also thinking!” “Because we’re not two, but we are one!” “We have one spirit that love and care for the CHURCH OF CHRIST just like you, we are all one in the body of our Lord Jesus Christ”.

So being duly authorized by the Lord God through the Lord Jesus Christ, under the guidance and instruction of the Holy Spirit. This time it was granted and everyone can share in this revealed mystery which had been hidden by the Lord God for a long time!

So, what is the significance of all these with reference to the things happening at present, will happen tomorrow and will happen in the future?

We start now from chosen Biblical passages quoting several verses and reading from the references that we quoted from wikipedia that contains excerpts from the record of the Messenger of God in these Last Days, Brother Felix Y. Manalo, Executive Minister Brother Eraño G. Manalo and the current Administrator, Brother Eduardo V. Manalo. This is commanded by the Holy Spirit! Each title can not be used by any other even if one has been laid to rest. Because for the elect there is no classification of their designated assignment, but the commandment of the Lord God must prevail and be duly observed.

We will now bring up pertinent questions and consult the bible for answers:

In Daniel 9:20 … God’s people plead with the Lord God to restore His Temple in the holy mountain … WHEN AND WHERE?

Isaiah 2: 2 RSV …  2 It shall come to pass in the latter days (last days) that the mountain of the house of the LORD shall be established as the highest of the mountains, and shall be raised above the hills; and all the nations shall flow to it,

The length of time is recorded in Daniel 9: 24 TEV … 24“Seven times seventy (490) years is the length of time God has set for freeing your people and your holy city from sin and evil. Sin will be forgiven and eternal justice established, so that the vision and the prophecy will come true, and the holy Temple will be rededicated.

WHAT YEAR AND WHEN?

Be mindful and share this Blog with our brethren in the CHURCH OF CHRIST. If they are weakening in faith because of corruption happening in the CHURCH OF CHRIST, through reading and following this blog they will be edified. Their hope will be rekindled realizing that they should never be affected with the things happening now. For these things must happen as declared by the Lord God and attested in the holy Scriptures before we received the promised salvation. Let the Holy Spirit attests. Your humble brother serves only for everyone’s benefit! I am utilized but I was not given the right to judge. The words posted here may hurt the concerned but never think that it is only me composing and pronouncing those words that you are reading. I entrust everything to the Lord God through the Lord Jesus Christ upon the inspiration of the Holy Spirit that promptly guides me all the time, so that fearlessly I will deliver unfailingly whatever is instructed to me.